French press react to SOS evidence at the Senate

At a Senate hearing, fans’ representatives – in particular from Liverpool, gave their account of the Champions League organisational debacle and called for the resignation of Gérald Darmanin.

They were the first to be affected; they were the last to be heard. Representatives of the supporters who were present at the Champions League final on Saturday 28 May, and who are used to being in the stands, swapped the stadiums for the Senate on Tuesday 21 June. After hearings organised with the various authorities – police prefecture, the French Football Federation and several ministers, and after the senators reported “the first lessons” drawn from more than two weeks of hearings, criticising “countless failings”– it was finally their turn to be heard by parliamentarians.

“What was supposed to be a wonderful weekend in Paris turned into a terrifying experience,” said Ted Morris, representing the Liverpool Disabled Supporters Association. “The trauma will remain for a long time”.

Until then, the Senate hearings had maintained the coldness of administrative exchanges, with each party justifying the behaviour of their own troops which led to this combination of failings – like the police prefect, Didier Lallement, on 9 June, or the representatives of the Union of European Football Associations, UEFA, on Tuesday morning

Fans’ accounts of their experiences marked a change in tone, giving substance to the numbers and figures that have been bandied about since the night of the match. These are “devastating accounts describing an apocalyptic situation”, said Patrick Kanner, the former sports minister under François Hollande, after Ted Morris recounted the experiences of an autistic 8-year-old child who was “crushed outside the stadium and separated from his father, assaulted by local residents and then sprayed with tear gas”.

Fans had lobbied for the right to speak before the Senate. “This is the first time since 25 February, when Paris was chosen [to host the final], that an institution has listened to us,” said Joe Blott, representing the Liverpool supporters’ association Spirit of Shankly.

Alongside French and Madrid supporters, the Liverpudlian did not mince his words about policing. “The French police force is stuck in the 1980s and assumes we’re all hooligans”, said Joe Blott, condemning “the stereotyping of football fans” and “police forces that are there for security, but not for safety”.

Call for the resignation of Gérald Darmanin

“The Liverpool fans were treated exactly as we are treated all year: as a threat,” said Ronan Evain, executive director of Football Supporters Europe (FSE), who was present at the stadium on the night of the match as an observer.

While the events surrounding the Champions League final (which saw Real Madrid beat Liverpool) have been largely exposed by the various hearings and by the report of the inter- ministerial delegate for the Olympic and Paralympic Games and major sporting events, Michel Cadot, the supporters denounced “the hasty communication, the initial error” made by the executive, according to Ronan Evain.

“Your endless lies and false narratives have only served to deepen our trauma. We will never forgive them”, said Ted Morris about the Minister of the Interior, Gérald Darmanin, calling on him to “retract [his] baseless accusations and to have the decency to resign”

Shortly after the match, Darmanin criticised the British supporters blaming the security fiasco on “ticket fraud organised on a massive, industrial-scale”. This theory has since been widely debunked, including on Tuesday by an official of UEFA, the organising body of the Champions League.

“Contrary to what was said here by the Minister of the Interior, the English supporters were not the cause of the incidents,” said the president of the Senate’s law commission, François-

Noël Buffet, apologising to the British fans who had come to France “so that justice could be done”.

With two years to go before the Paris 2024 Olympics and one year to go before the Rugby World Cup, supporters’ representatives called for more direct communication with the authorities – including the police – to prevent such failures from happening again.

“We have to learn to practice welcoming supporters,” urged Pierre Barthélemy, representative of FSE. He said that France, “the only country in Europe that bans football fans from travelling every weekend on the grounds that we don’t know how to manage them”, had a lot to learn from its neighbours about how to manage supporters. “If you can’t manage 50 fans, you obviously can’t expect to be able to manage 80,000.”

Seated alongside him, the Liverpool fans nodded in agreement. 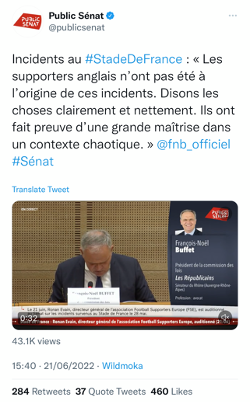 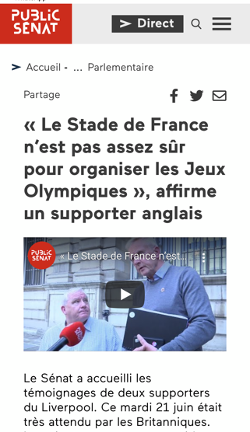 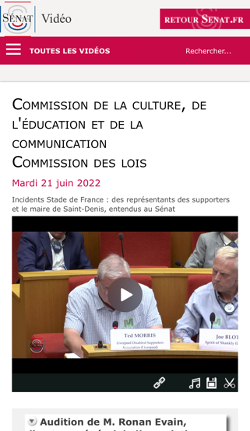 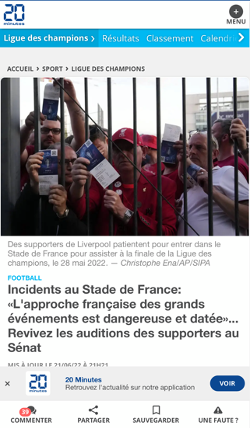 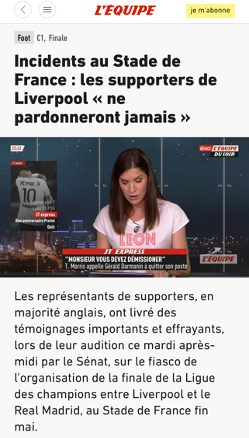 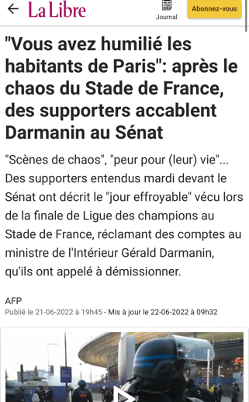 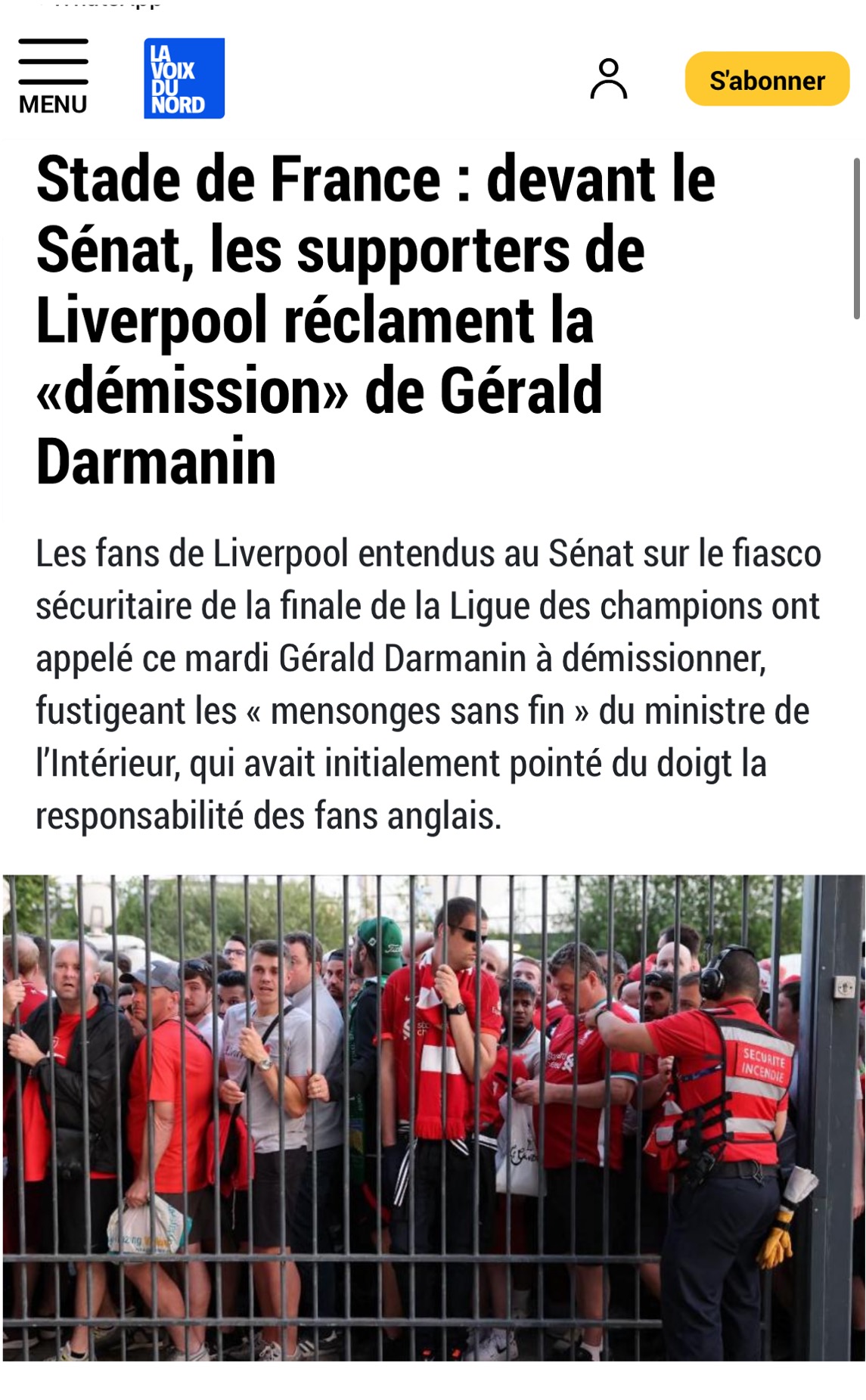 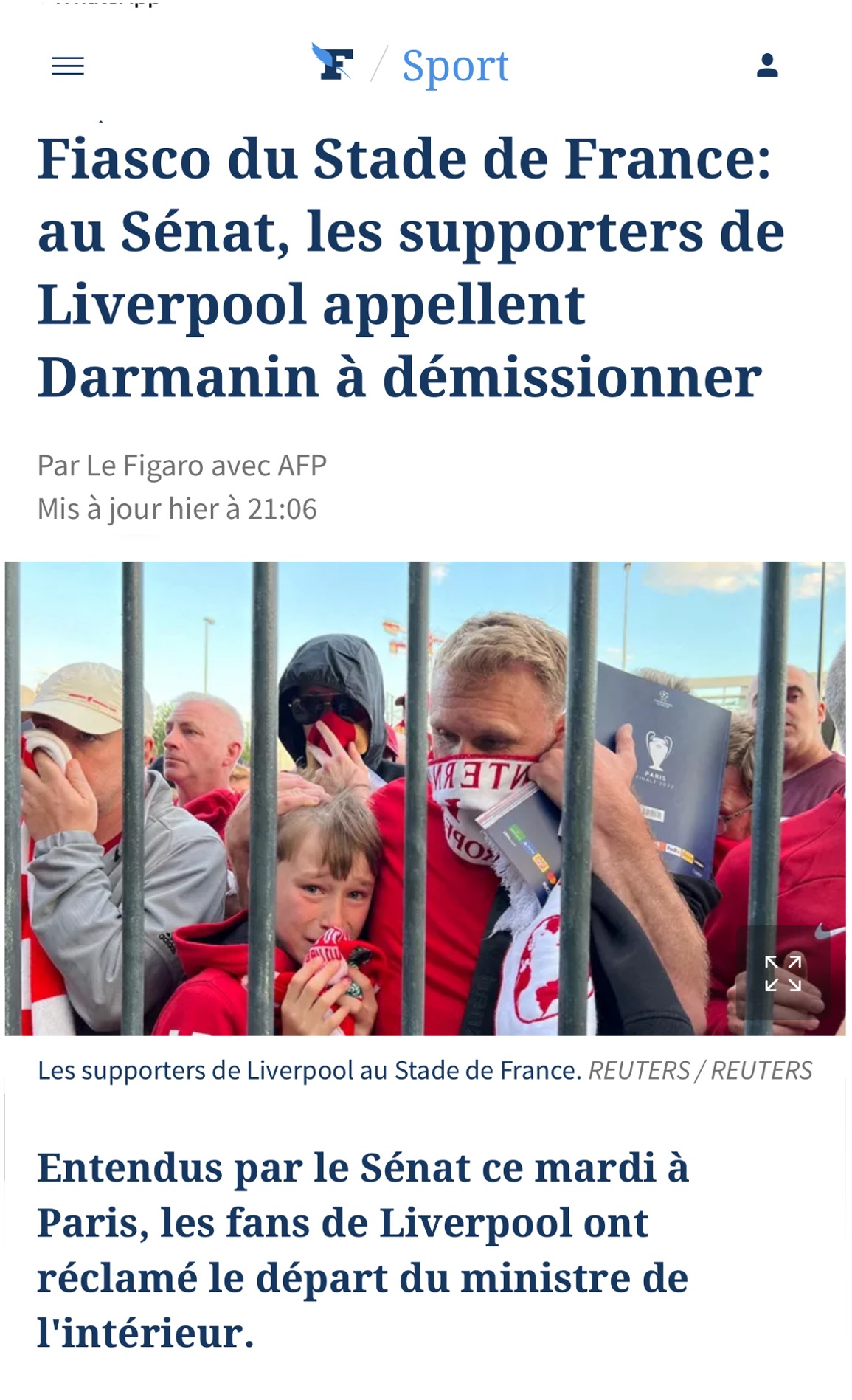