Welcome to your new SOS newsletter Spirit of Shankly (SOS) is proud to launch a new-look newsletter to members.

Our Chair Joe Blott and the SOS committee hope this will help to keep you up to date with the work of our supporters’ union, in which we all play a part.

If you participate in an initiative relating to the aims of SOS and would like to update members via this newsletter, you can send details to: mc@spiritofshankly.com

On 24 September Spirit of Shankly gave evidence to the UEFA panel investigating events at May’s Champions League Final in Paris. Four members of the management committee and three supporter representatives gave testimonies for over four hours.

We left the session feeling our messages had been heard and were encouraged by UEFA’s responses. Colleagues from Liverpool Disabled Supporters Association also provided testimony.

The UEFA report is due this month. We are concerned that this could be timed to deflect attention with the World Cup taking place, but we will ensure this doesn’t happen. You can read our submission here.

Other reports worth a read include:

Daily Mail: “France ‘should not host major finals after the Stade de France debacle last May.”
The Guardian: “How the Champions League final descended into chaos – visual investigation.”

An update on the role of the LFC Supporters Board, managed by SOS

It is two months since the launch of the Supporters Board (SB) and, following some enquiries from members and fans, we wanted to provide an update on how it will work, in order to prevent any misunderstanding over its role.

Spirit of Shankly and Liverpool FC entered a new era of supporter engagement with the SB that sees fan representation at board level. But this does not mean the SB has a seat on the LFC Board, no supporters sit on that Board. The fan-led SB is a completely separate entity, created to deal with issues that matter to fans.

Spirit of Shankly will manage the SB, but we are also a separate body. We will continue to work with LFC on a range of day-to-day concerns, influencing decisions where we can and holding the club to account.

The Supporters Board will work with LFC on strategic issues affecting the future of our club, such as their long-term plans, overall ticketing strategy, improving equality, diversity and inclusion and influencing LFC decisions off the pitch. It will have a veto on existential matters of importance to supporters, such as joining a breakaway league or moving away from Anfield.

Crucially, the power of veto is now written in the club’s Articles of Association meaning even if there is a change of ownership, something like moving away from Anfield could not happen without fans’ consent. This in effect provides a legacy of engagement for future generations.

The SB and LFC Board will meet once a season and the SB and LFC Executive Committee will meet three times a season. Other meetings will take place as required.

We will keep you updated with any news. 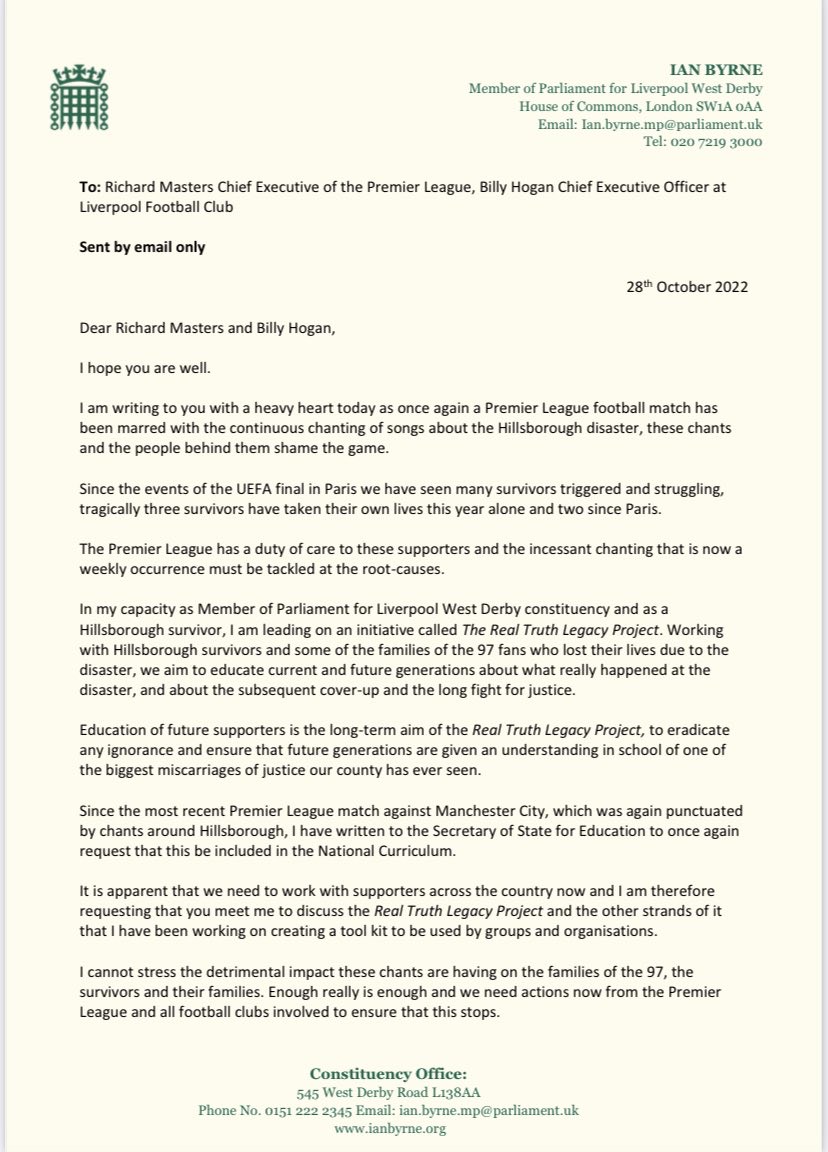 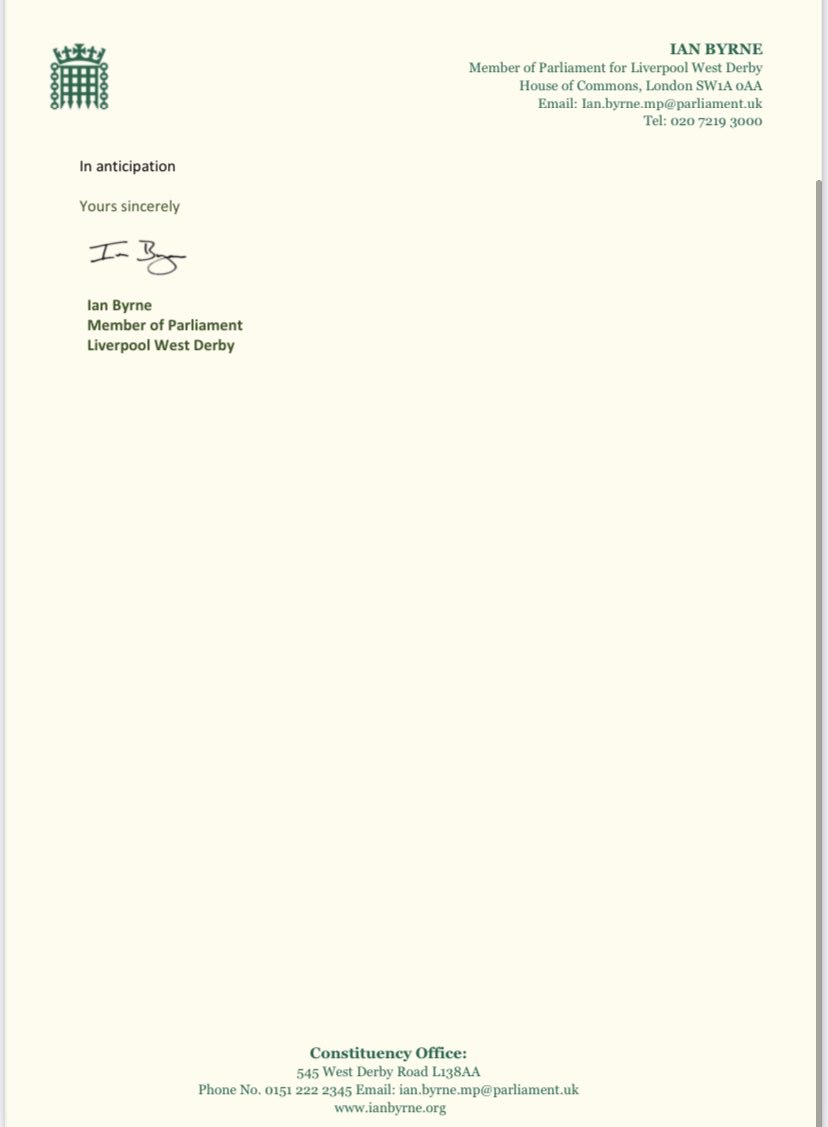 SOS fully supports the letter to the Premier League written by Liverpool West Derby MP and SOS committee member Ian Byrne, calling out the disgraceful chants about Hillsborough at matches – and the devastating impact this has on so many fans.

As Ian says, these chants “shame the game” and formal action by the game’s authorities are long overdue. We await a response from the Premier League with great interest. #JFT97Spirit of Shankly in the community…

At the recent Champions League game against Rangers FC, in conjunction with Fans Supporting Foodbanks (FSF) and Unite the Union, the SOS coach delivered a huge donation of food from Merseyside to support those in need in Glasgow.

Chair of FSF, Dave Kelly, said: “This is a fantastic show of support to our friends in Glasgow. People in the past have said beware of Scousers bearing gifts, but this shows solidarity with communities in the cost-of-living crisis.” 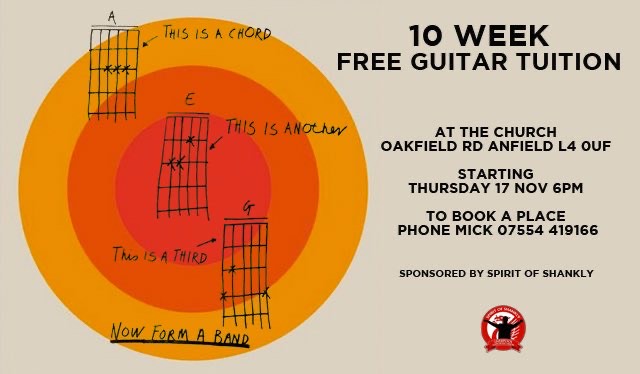 We are really pleased to announce we are sponsoring free guitar lessons at The Church in Oakfield Rd, Anfield, starting on November 17 at 6pm.

The sessions are for over-16s only, using guitars donated by Echo & The Bunnymen, The Lightning Seeds, The Farm, Inhaler, Jamie Webster, Jay
Lewis and Andy Hodgson. Sincere thanks to all.

Spirit of Shankly in the community…

• We are in discussions with Katie Ellis Carrigg, Head of Sports and Inclusion at the LFC Foundation, regarding a mobile pantry in Anfield with potential
funding from LFC/Steve Morgan Foundation. We will keep you updated.

• We were thrilled to work with the Thiago Alcantara Family and LFC Foundation to organise a fundraiser for the Greenhouse Project. We raised £38.5K on the day.

• We honed our kitchen skills helping at the Scouse Kitchen, where two professional chefs cooked a three-course meal for families, who could sit down and eat together. It was hosted at St Cecilia’s School in West Derby.

Please use the Contact Us link if you haven’t received a copy of this newsletter to the email address you have registered with us.