Sean Cox was a defenceless victim to a shocking and unprovoked attack outside Anfield before the Champions League semi-final against Roma on April 24 2018.

As fellow supporters, we wanted to show the Cox family they were not alone. Sean faced a long, expensive road to recovery and we wanted to help in whatever way we could.

We organised a bucket collection for Sean Cox at Anfield, on Saturday 27th October.

Following this Sean’s brothers Martin and Peter visited the city for a reception at the town hall and to thank everyone for the support they have received. SOS have remained in regular touch with the family and were pleased to see Sean at Anfield recently. 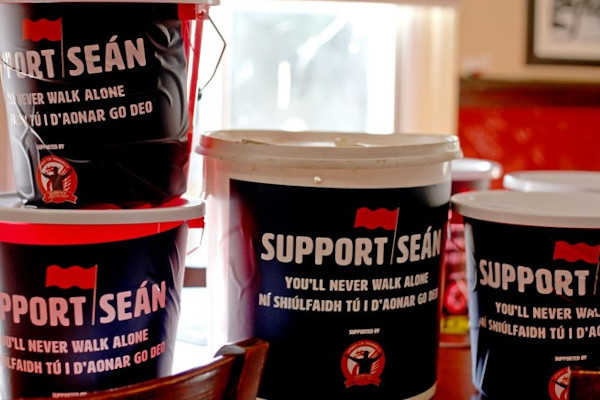 “Thanks for the many good wishes I have received since my appointment. “On Friday, 12 April, I was proud to represent Spirit of Shankly alongside fellow committee members, Ste Monaghan, Kieth Culvin and Ian Byrne, as we travelled to Dublin in support of Sean Cox ahead of the Legends match.

“On behalf of the Cox family I wish to express my deepest thanks to Spirit of Shankly and everyone involved in the fundraising today and over the last months, from the people of Liverpool, home and around the world for their amazing kindness and generosity which has been overwhelming and has given us great hope and support for Sean's continued recovery. YNWA"

Spirit of Shankly can today confirm that a total of £59,104 has been raised for the Sean Cox appeal.

Spirit of Shankly are organising a collection for Seán Cox at the game against Cardiff City at Anfield on Saturday 27 October, and we need volunteers to help on the day.

Following the shocking and unprovoked attack on a defenceless Liverpool supporter outside Anfield before the Champions League semi-final against Roma last night, the thoughts of everyone associated with Spirit of Shankly are with the victim and his family and friends.